Hosted and directed by Margaret Carrigan. Filmed and edited by Travis Wood. Produced by Helen Stoilas

The Art Newspaper's editors break down the art market's biggest stories and spectacles, with the help of special guests. In our pilot video series Hammer Time, our deputy art market editor Margaret Carrigan recaps the highlights of New York's billion-dollar auction week, interviews specialists and brings you views from the salesroom.

In what was the most energetic sale of the week, Sotheby’s contemporary evening sale fetched $270.7m (with fees), squarely within its $213.7m to $300.3m estimate. That is still $75m less than Christie’s contemporary results the night before, but with a strong 92% sell-through rate and 82% of lots hammering at or above their estimates (versus around 60% to 65% in all other evening sales this week), Sotheby’s hit a small sprint in an otherwise sluggish sale cycle.

Perhaps bidders were revved up from Phillips’s $108m auction earlier in the evening, where 95% of the lots sold. Whatever the reason, paddles were flying high for the first work to hit the block at Sotheby’s, Charles White’s Ye Shall Inherit the Earth, which hammered at $1.45m ($1.8m with fees) after a four-minute bidding war. The work on paper bested White’s freshly minted world record, set the night before at Christie's—the first ever appearance of the artist’s work in an evening sale—when the painting Banner for Willie J made $1.2m (with fees).

Another first in an evening sale was Norman Lewis’s Ritual, which set the room a-flutter and sold for $2.3m ($2.8m with fees), tripling its low estimate and doubling the artist’s world record. Additional records were set for Brice Marden, whose Number Two sold for $9.6m ($10.9m with fees), perhaps in part due to a critically acclaimed solo show of his work currently on view at Gagosian in New York. Wayne Thiebaud’s Encased Cakes sold for a record $7.2m ($8.5m with fees), a sweet treat for the artist on the eve of his 99th birthday—here's hoping he gets a supremely good cake this year. 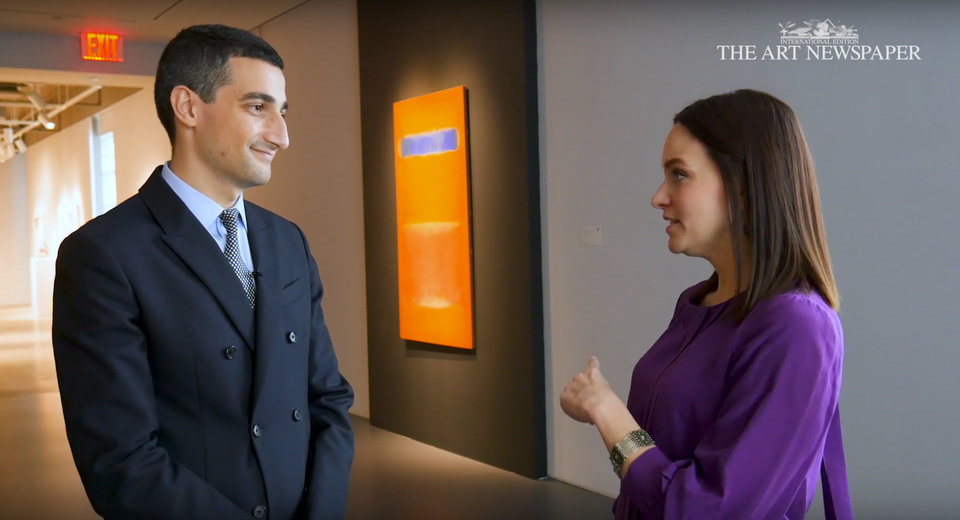 Screen shot from the video

Though not a record for an artist's price but perhaps for prolonged bidding, Clyfford Still’s PH-399 sold for $21.1m ($24.3m with fees) after a 15-minute battle between at least three phones that had the crowd yawning as the evening’s auctioneer Oliver Barker inched bids up by $50,000 and $100,000 increments.

The most anticipated lots of the night, however, proved less enticing. Willem De Kooning’s Untitled XXII, making its auction debut with an estimate of $25m-$35m, scooted quickly and unceremoniously past its low estimate at $26.2m ($30.1m) while Mark Rothko’s Blue Over Red did not quite hit its low-end estimate ($25m-$35m), hammering for $23m ($26.5m with fees).

After Christie’s set the world record for the Los Angeles artist Ed Ruscha on Wednesday night, it was curious when the artist’s She Gets Angry At Him, from the collection of the designer Marc Jacobs and the third lot in Sotheby’s sale last night, was bought in at $1.9m on a $2m-$3m estimate. In a rare moment of auction deja vu, the work re-appeared on the block as the last lot of the evening—suggesting a reserve price may have been lifted—and fetched a hammer total of $1.4m as everyone put on their coats, concluding another gigaweek in New York.

Our daily newsletter contains a round-up of the stories published on our website, previews of exhibitions that are opening and more. On Fridays, we send our Editor’s picks of the top stories posted through the week. As a subscriber, you will also get live reports from leading art fairs and events, such as the Venice Biennale, plus special offers from The Art Newspaper.

You may need to add the address newsletter@theartnewspaper.com to your safe list so it isn't automatically moved to your junk folder.

You can remove yourself from the list at any time by clicking the “unsubscribe" link in the newsletter.